I freelanced a script for Monk in its second season and joined the writing staff in Season Three. By Season Eight, the show’s last, I was a co-executive producer. I had contributed to ninety-seven episodes, receiving a writing credit on sixteen of those episodes and sole writing credit on seven. 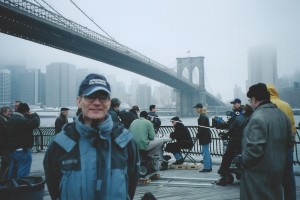 Monk was primarily shot in Los Angeles, first at Ren-Mar Studios then later at Paramount. An exception was Mr. Monk Takes Manhattan. It was a treat for the New Jersey-based writers to be able to visit the set without getting on a plane. In this scene Monk questions a man playing chess near the Brooklyn Bridge. 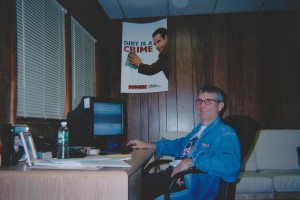 My office in the writers’ suite, October 2004

We writers worked in an office building in Summit, New Jersey. The facilities were first-class but I had a long commute, fifty miles each way. I often used the time to brainstorm ideas for the show. The “perfect” murder in “Mr. Monk Gets Stuck in Traffic” came to me as I contemplated a car carrier truck barreling up Interstate 95. A few times, when a blizzard made my commute too dangerous, I spent the night on the futon in the photo. 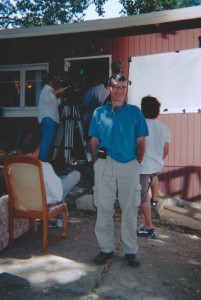 A writer had to be on the set whenever an episode was being shot. The writer “protected the script” by making sure that dialogue and action important to the story were performed as written. The writer also consulted on any script changes the director wanted to make to accommodate the location or the schedule. I often had to write new lines on the spot and the pressure was on because dozens of people were standing around doing nothing until I came up with something that worked. My experience in the fast-paced environment of late-night comedy/talk shows helped. 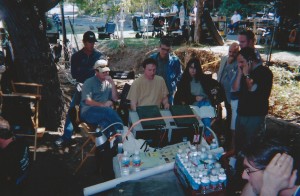 I peer over the shoulder of Jerry Levine, the director of “Mr. Monk Gets Cabin Fever.”

The cluster of monitors and folding chairs where the director, script supervisor, and others watch the filming is called “video village.” I sat there during takes, headphones on, eyes on the script, monitoring the dialogue. 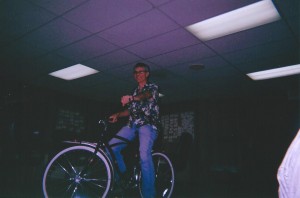 Riding a “Monk” bike through the writers’ room, August 2006

Every holiday season Tony Shalhoub and the executive producers gave each staff and crew member a fun present. One year it was a customized Monk bicycle. The writers’ office suite was so spacious that we often took our bikes for an indoor spin to clear our heads. 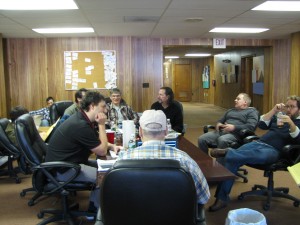 The writers all had their preferred spots around the table. For all six seasons the end of the table opposite Monk creator Andy Breckman (in the baseball cap) was mine. I liked having a good view of the corkboard Andy used to outline each episode with file cards.