Behind the Hollywood sign in July 1993. Clockwise from me, with the football: Dave Rygalski, James Baldwin, Fred Wolf, and Andy Aaron.

Right before I joined The Tonight Show as co-head writer I held the same position on The Chevy Chase Show. Chevy’s show only lasted on the air five weeks but the writers and I had some fun. One day we went up to the Hollywood sign to explore the possibility of Chevy tossing a football through the D. 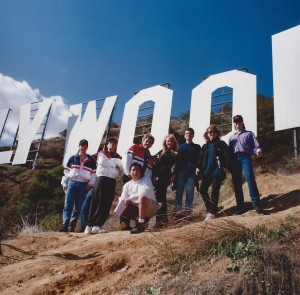 With Jay, Charlie Sheen, and other cast and crew at the Hollywood sign, February 1994

We never managed to produce the Hollywood sign comedy piece for Chevy’s show and it became my Great White Whale. I conquered the piece seven months later on The Tonight Show: I had Jay coach Charlie “Major League” Sheen in throwing a baseball through the D. See my blog post “5 Reasons To Do Field Pieces” for more photos. 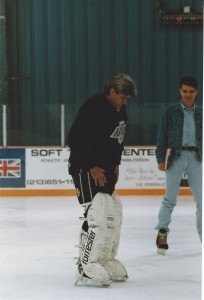 Jay was always up for pretty much anything that might set him apart from the late-night competition. For example, for one comedy piece we went out to the rink where the Los Angeles Kings hockey team practiced. Jay suited up as a goalie and we taped the players nailing him with slap shots.

At my desk with writers (clockwise from me) Peter Sears, T Sean Shannon, and Mike Colasuonno, November 1995.

The other co-head writer, Joe Medeiros, and I shared an office next door to Jay’s. Jay’s door was literally always open, which made it easier for us to pitch comedy ideas and keep the show well-stocked with material. 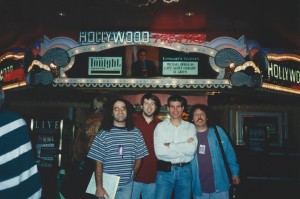 Just before I left Tonight to relocate back East we did a week of shows in Las Vegas at the MGM Grand. Vegas is always fertile ground for comedy, with plenty of relatable topics and colorful environments. I also did shows there on Late Night with David Letterman.