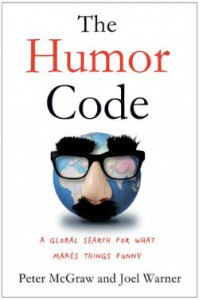 Scholars and theologians have been trying to answer that question since the dawn of comedy. Now Peter McGraw has a theory, the benign violation theory, which he discusses in his entertaining new book The Humor Code, co-written with Joel Warner.

The benign violation theory of humor says that, as Peter puts it, “Laughter only occurs when something is both wrong and okay.” Does that theory crack the humor code of late-night comedy/talk shows? Yes, but only up to a point.

As I put together my book Comedy Writing for Late-Night TV I realized I needed a theory to explain why people laugh. A convincing theory of laughter would make all the comedy writing advice in my book seem less random.

So I did some research and decided that the benign violation theory makes a lot of sense. But the more I thought about how jokes are actually written and about what makes one version of a joke funnier than another, the more I realized that I had to tweak the theory to make it fit the short-form comedy found on late-night TV. The amended theory that I use in my book I call the Surprise Theory of Laughter.

The Surprise Theory of Laughter: We laugh when we’re surprised that an incongruity turns out to be harmless.

My Surprise Theory differs from the benign violation theory in two key ways. The first key difference is this:

The Surprise Theory implies that a sequence of events, rather than simultaneous events, produces laughter. To be more specific, laughter results when something first seems incongruous (a violation) and then is revealed to be harmless (benign).

Let’s see how this sequence of events unfolds in a typical late-night monologue joke, one that I recently wrote and posted on Twitter:

When listeners hear “Mile Wide Club” their first thought is, “That’s wrong. It’s supposed to be ‘Mile High Club.’ That’s what airline passengers join.” But then a split-second later they realize that “Mile Wide Club” actually does make sense because eating all those pancakes would make passengers extremely fat. 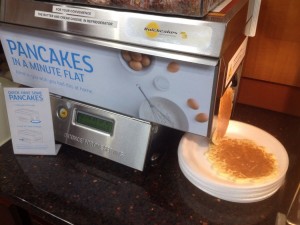 The initial violation of the listeners’ worldview turns out to be benign. So the listeners laugh, like prehistoric cavepeople signaling to their cave families that some suspiciously rustling grass does not hide a deadly saber-toothed cat after all but instead a couple of mating monkeys.

The second key difference between the benign violation theory and my Surprise Theory of Laughter is this:

The Surprise Theory acknowledges the importance of, yes, surprise in producing laughter. Building on Peter’s words, the Surprise Theory says that laughter only occurs when something is first wrong and then, surprisingly, okay.

To see how important surprise is, let’s remove some of it from the sample joke this way:

“Alaska Airlines frequent-flier lounges have pancake printers that make 180 pancakes an hour. So now instead of joining the Mile High Club, passengers can join the Mile Wide Club.” 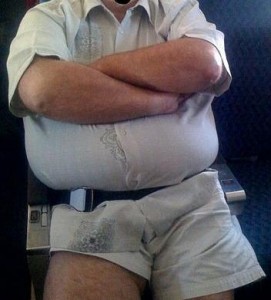 That revised joke wouldn’t get as big a laugh, would it? The reason is because as soon as listeners hear “Mile High Club” they start expecting a play on those words as the punch line. So “Mile Wide Club” isn’t quite as surprising when it finally arrives. As Joke Maximizer #5 in my book advises: Don’t telegraph the punch line.

Here’s a different way I could rewrite the original joke to reduce the surprise:

“Alaska Airlines frequent-flier lounges have pancake printers that make 180 pancakes an hour. So now joining the Mile Wide Club is something else passengers can do.”

That revised joke puts what I call the laugh trigger—the most unexpected, surprising word or two in the punch line—in the middle of the joke. So when listeners hear “Mile Wide Club” they know the meat of the punch line before the joke is even finished. As a result, their laughter is more diffuse and not as strong. Writers can avoid that problem by applying my book’s Joke Maximizer #2 and ending their jokes on the laugh trigger.

Comedy Writing for Late-Night TV is packed with other practical tips, tricks, and techniques that demonstrate the Surprise Theory of Laughter in action. Taken together they provide ample evidence that the benign violation theory only begins to explain what makes people laugh.

This post is based on a guest post I wrote for the website of The Humor Code. See how the co-author of the book, Peter McGraw, responded to my argument here. He wasn’t entirely convinced.

According to a teacher, a school in Kentucky is "infested" after a snake and a mouse fell from classroom ceilings. The good news is, now the school is teaching 4 Rs: reading, 'riting, reptiles, and rodents.

Tonight Elton John will be performing at the White House. To support President Biden's climate policies he'll be singing "Bennie and the Teslas," "Don't Let the Sun Go Down on My Solar Panel," and "Energy-Efficient LED Bulb In The Wind."

Today a lot of Russians tried to buy plane tickets out of Russia so they won't have to fight in Ukraine. They want to leave so bad, they're like, "Hey, Ron DeSantis, any seats left? We'll fly anywhere. Martha's Vineyard…Delaware…"

An executive at food company Beyond Meat has been accused of biting a man’s nose in a fight. In his defense, the executive said it was all to promote Beyond Meat's newest product: nasal cartilage burgers.

An Idaho man broke a Guinness World Record by riding a unicycle for 30 miles while juggling. No word on what he was juggling, but I think we can rule out multiple girlfriends.