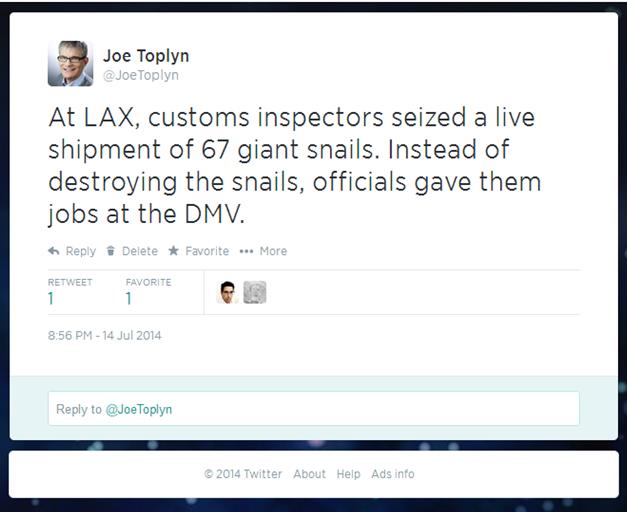 Tonight in New York City is Broadway's big night, the 74th Annual Tony Awards. Even the cabbies are excited. After they give you the finger, they do jazz hands.

I'm impressed, Gizmo. Learning from my book how to write jokes, sketches, and other short-form comedy is the best Stupid Pet Trick ever! twitter.com/Jahnnalee/stat…

Gizmo reading about comedy writing until he decided to take a snooze 😂💤 @JoeToplyn pic.twitter.com/W46hwteYKz

Researchers discovered fossilized footprints in New Mexico that shed light on when people first arrived in the Americas. And right behind those footprints, footprints of the second people in America-- the Border Patrol.

Because of supply chain issues, grocery stores have a shortage of Lunchables. So now busy parents will have to find another convenient way to give their kids the message that the Food Pyramid is for chumps.

Americans are stockpiling toilet paper again, so it's harder to find now. A nationwide shortage of toilet paper...or as Taco Bell calls it--DEFCON 4.

A group in a Chicago suburb is trying to set a world record for the largest dog wedding ceremony, with over 300 dogs. The dogs don't really care about getting married. They just want to play Fetch the Bouquet.