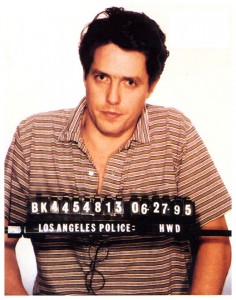 This week, on June 18, Access Hollywood perpetuated a longstanding misconception about The Tonight Show with Jay Leno. A voiceover referred to “the game changer, when in 1995 Hugh Grant came on shortly after his dalliance with a prostitute. Jay beat Letterman in the ratings that night and stayed number one for nineteen years.”

Game-changer? So Hugh Grant’s appearance on Tonight was solely responsible for the show’s ratings dominance for almost two decades? Ridiculous. 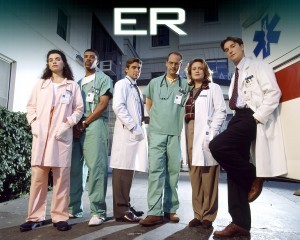 In fact, the night Grant appeared (July 10, 1995) wasn’t even the first night that Tonight topped Late Show in the ratings. By that time Tonight had been routinely beating Late Show every single Thursday night for months thanks to the huge lead-in provided by the hit show ER. And many weeks the ratings gap between Tonight and Late Show was only a tenth of a point. 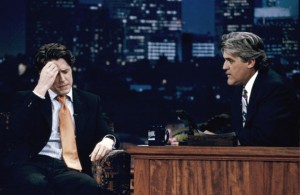 So why do the media keep trotting out Hugh Grant? Because he makes for a fun, easy-to-follow story: “Ain’t life crazy? The only reason Jay got to number one is because some dumb Hollywood actor got caught with a hooker.” And Grant did play a role in a ratings milestone: the week he appeared on Tonight was the first week that the show beat Late Show when measured over an entire week of head-to-head original episodes. But Tonight won three nights that week, not just the night that Grant guested.

The truth is, Access Hollywood, that no one single “game changer” led to Tonight taking the late-night crown from Late Show. Many factors changed the game. I describe one of those factors in my post “When O. J. Simpson Killed, So Did Jay Leno.” For more, read my book, Comedy Writing for Late-Night TV.

A team of domino artists in Michigan broke a Guinness World Record by building a wall out of more than 50,000 dominoes. The team said the best way to keep a big wall of dominoes from falling apart is to keep the Supreme Court away from it.

At a pageant in California, a Chinese crested-chihuahua mix was crowned the World's Ugliest Dog. The judges said the dog is so ugly that when other dogs come up to him they don't know which end to sniff.