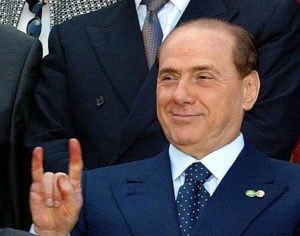 Your audience won’t be engaged by a topic that’s not true. Instead they’ll be thinking, “That guy doesn’t know sign language. He’s only saying he does to set up some tricky punch line to show us how clever he is.” Thus annoyed and distracted, your audience won’t laugh.

Or take this captioned-photo joke, #20 in an article on CollegeHumor.com entitled “20 Puns Even People Who Hate Puns Will Admit Are Good”: 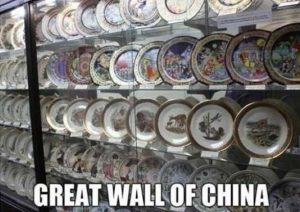 In a well-constructed joke, the topic and the angle (also known as the setup) lead the audience to expect something. The punch line is unexpected, so the audience is puzzled at first. Then they are surprised when they realize that the punch line actually makes sense, and they laugh.

But in the joke above, the setup (the words “Great Wall of China”) and the punch line (the photo of the plates) are both visible at exactly the same time. So the audience has no opportunity to form any expectations about what the words mean; their meaning is right there in the photo. The audience isn’t surprised, so they don’t laugh. The captioned photo is just, again, a demonstration of the writer’s cleverness.

And the punch line is surprising. The wordplay–“crabs”–arrives at the very end of the joke, only after the topic and angle have led the audience to expect something about sea creatures.

« Joke About the Spice Girls Reunion
Joke About Smoking Outside Starbucks »